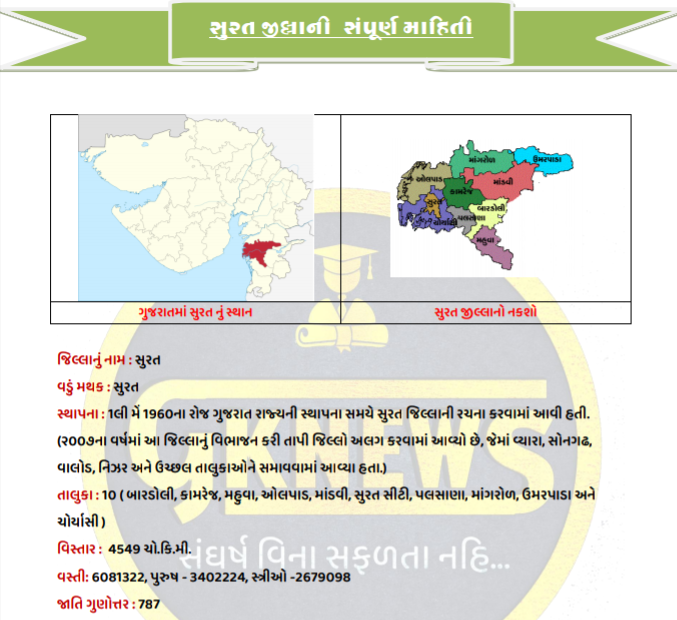 Surat is a city in the Indian state of Gujarat. It used to be a large seaport and is now the commercial and economic centre in South Gujarat, which is famous for its diamonds and textile Industries and as a shopping centre for apparels and accessories. It is the eighth-largest city and ninth largest urban agglomeration in India. It is the administrative capital of the Surat district.

The city is located 284 kilometres (176 mi) south of the state capital, Gandhinagar; 265 kilometres (165 mi) south of Ahmedabad; and 289 kilometres (180 mi) north of Mumbai. The city centre is located on the Tapti River, close to the Arabian Sea. Surat will be the world's fastest-growing city from 2019 to 2035, according to a study conducted by Economic Times. The city registered an annualised GDP growth rate of 11.5% over the seven fiscal years between 2001 and 2008.

Surat was awarded "best city" by the Annual Survey of India's City-Systems (ASICS) in 2013. Surat is selected as the first smart IT city in India which is being constituted by the Microsoft CityNext Initiative tied up with IT services majors Tata Consultancy Services and Wipro.

The city has 2.97 million internet users, about 65% of the total population. Surat was selected in 2015 for an IBM Smarter Cities Challenge grant. Surat has been selected as one of twenty Indian cities to be developed as a smart city under PM Narendra Modi's flagship Smart Cities Mission.

All About Surat District PDF

Surat is listed as the second cleanest city of India as of 21 August 2020 according to the Swachh Survekshan 2020 on 20 Aug. It suffered a major pipeline fire which caused some damage.

Surat, famous for its diamond cutting and polishing, is known as the Diamond City of India.

It has various engineering plants like Essar, Larsen and Toubro and RIL.

Surat won the Netexplo Smart Cities Award 2019 with UNESCO in the resilience category. Surat’s mayor will receive the award at the UNESCO House in Paris, France in March next year.