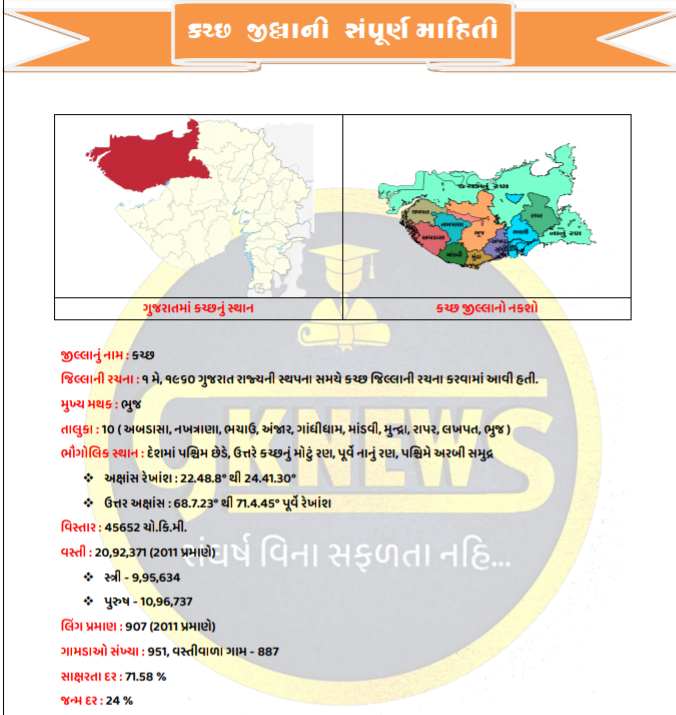 About Kutch district
Kutch District India is the largest district in the western part of the country in the state of Gujarat. Kutch district, which is spread over an area of 1,550 sq km, is the largest district in the country of India. The ancient metropolis, Dholavira, which dates back to the ancient Indus civilization, is located in the Khadir region of Bhachau taluka in Kutch district. In other areas, ancient fossils have also been found, whose research work is ongoing.

Geography
The neighboring country of Pakistan lies to the north of Kachchh, the Arabian Sea to the west and the Gulf of Kutch to the south, which separates Kutch from Kathiawar. In the north and east of Kutch there is a small and large desert of Kutch respectively. Banaskantha district comes after this desert area east of Kutch. Kutch is the state boundary with Banaskantha, Patan, Surendranagar and Morbi district M1 and Rajasthan to the north. The total geographical area of the district is 5, 5 sq. Km. Is. Out of which, 1,2,3 sq km. The desert of Kutch is situated in the area of. Kutch district has an area of about 3% of the total geographical area of Gujarat. There are 4 talukas, 3 cities and 3 villages in the district.

Kutch is the main language of Kutch, except most remote villages, Gujarati is also spoken and understood by most people. In addition, many people here also know Sindhi, Hindi and English.

Industries
Kutch district has a variety of natural resources. These include mineral properties like lignite, bauxite, lime, bentonite, gypsum, coastal property, pastoral property, agricultural property, etc. Mineral resources are available in abundance in the district. Which is a major aspect of the district in industrial terms. In the new industrial policy, new projects and other facilities and benefits of medium and large size units, other new established and first established industries and electronics industries have been announced by the government.

All About Kutch District PDF

The salt industry is the largest in Kutch. 5% of the state's salt is baked in Kutch and exported. The shipping industry has developed in cities like Gandhidham, Kandla, etc. In Gandhidham, there is a Freitrade zone for industries, also known as the Kandla Freitrade Zone and according to the new policy it is now pursued as the Kandla Special Economy Zone. The transport industry has also evolved due to ports. Besides, the mines of Panchdro, mother's mother, lignite, etc. at Kutch are also nourished by the transport industry. The livestock industry is prominent in the Bani area. Bunny breed buffalo has been recognized by the government. Besides, agriculture, tourism, etc. industries have also developed in Kutch.
Ports
The state of Gujarat is 5 km. The riverside is obtained. Out of which 5 km. Kutch district, which is the longest river coast of Gujarat, is naturally acquired.

There are small ports in the district. Which are Mandvi, Mundra, Jakhau, Tuna and Kandla respectively. It is the only largest international port in the state of Gujarat. The region has well-connected perennial roads, including meter gauge, broad gauge railway lines and national highway No. 1-A. There are ships in Mandvi. So that new wooden ships are purchased and repaired and construction of new jetty has begun. In the coming days, an ambitious plan to build a Sheep Breaking Yard, Sheep Maintenance Yard in Kutch is going ahead.
Tag : Study Materials