The Reserve Bank of India has recently launched a Rs 20 coin. It was designed by Spunil Soni, son of Mungeli. Swapnil, a former student of the National Institute of Designing (NID) Ahmedabad, designed the coin last year, when the RBI sought an application to design the coin. Swapnil's design was selected by the RBI from applications received from across the country

According to Swapnil, the coin designed by him is different from the rest of the coin. It has a glimpse of the Agriculture Minister of India and has 12 corners. Copper and Nickel have been used between the coins. What is special is that even a blind person can easily recognize it. On a separate part of the coin is inscribed Ashoka Pillar and its lower Satyamev Jayate. Ashoka has written India on the right and India on the left. The back of the coin is marked with Rs 20 in Hindi and English.

Swapnil is very happy that his designed coin will be seen all over the country. Swapnil has also got a prize of one lakh rupees for it. Virendra Soni's son Swapnil, who retired as a driver in Mungeli's excise department, has been interested in designing since childhood. His early education took place at the Saraswati temple in the village. 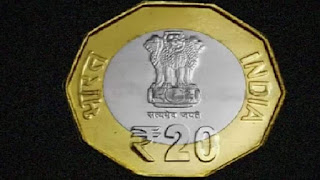 Look, this coin looks exactly like an old time coin of 2 rupees. This new coin has 12 panels.

On the other side of the coin is the Ashoka pillar and below it is inscribed Satyamev Jayate. On the right side of the Ashoka pillar is written 'Bharat' in Hindi and on the left side is written 'Bharat' in English. A new symbol of rupee has also been made inside the coin, in which 20 is also written. India is an agricultural country, so wheat hair brokers are also featured on one of its parts.