Will users leave Whatsapp now? Google made this big preparation

Will users leave Whatsapp now? Google made this big preparation 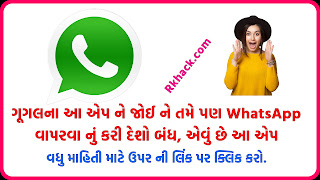 With Google's big preparations, it seems likely that you will give up Whatsapp and iMessage now.  Google is going to offer some features in Google's Google Messages App, which can be challenging for WhatsApp.  This app is already being installed in many Android devices.  The biggest feature of this is RCS (Rich Communication Services) support.

However Google is slowly expanding partnerships with operators.  These features allow you to send messages via Wi-Fi or data network.  You can also see when the person in front is typing and when he has seen your message.

Google is testing a new Emoji Reactions feature for this app.  After this feature comes, you can long press on the message and choose the reaction of your choice.  In it you get emojis like Thums Up, Thums Down, Anger, Laughter.


It will also feature end-to-end encryption for rich communication support, according to the report.  Once this feature is available, no outsiders will be able to see the message except the sender and receiver.  A similar feature is also found in WhatsApp.

Let me tell you, the Google Messages app has been downloaded over 1 billion times so far.  In this app you get a clean and simple interface.  It's one of the company's early apps that got Dark Mode support.