Good news: A youth-created device that can help prevent coronavirus

Good news: A youth-created device that can help prevent coronavirus 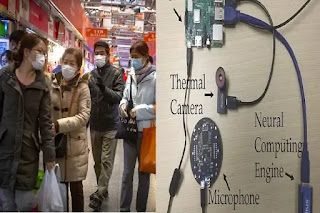 Right now the whole world is battling an epidemic like coronavirus.  Doctors and scientists have begun to search for this deadly virus drug.  In the midst of such a situation, a researcher at the University of Massachusetts Amherst has succeeded in creating one.  Which can help prevent the corona.


The inventor has created a machine that listens specifically to coughing or sneezing and can record it.

This shows that over one percent of the people in public places have a respiratory illness.

In addition to recording non-speech audio samples on a Fluisonon device, thermal cameras are also being used to scan the temperature of people.

According to co-creator of the machine Tauhidur Rahman, the device does not mean excluding personal illness cases.  But with regard to attitudes at the demographic level, it is important to see what is being developed that has not yet been brought to medical examination.


He said that I thought that if we could catch coughing or sneezing in public places, a lot of people would naturally gather.  We can use this information as a new source of data to predict epidemiological trends

Initial tests for the device were conducted between December 2018 and July 2019.